Something new for us during the past year was the chance to be involved in a designer showcase home.  The house was used to benefit McCune Brooks Healthcare Foundation's mammogram program.  The entire home was decorated by several area designers and then open for viewing.  It will soon be sold to a new owner! 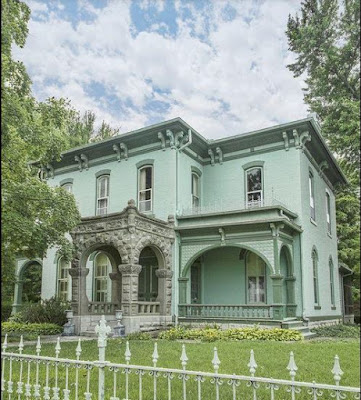 If you are from the Joplin or Carthage, Missouri area, you have surely driven past this stately home located at 903 S. Main Street, in Carthage.  The master bedroom was our choice, and is located on the upper left side if you are viewing the house from the front. 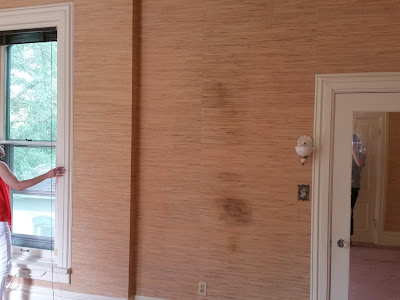 The bedroom, and the majority of the house, was papered with what I was told was Brunschwig and Fils grasscloth.  Some rooms left it intact, as was the upstairs landing.  It was repaired and painted, and came off looking very rich.  A pale grey paint was chosen which gave a new look to the previous red grasscloth, which had faded from many years of morning sunlight.

Our gold masterbedroom's wallpaper had darken behind some furniture and in need of repair as well.  Luckily, the foundation was willing to have it stripped off and only a small amount of the wall underneath needed some patching----whew! 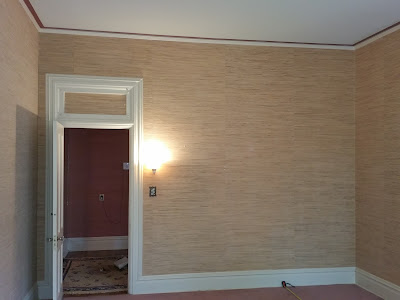 This photo shows the landing color through the doorway.  Notice the transom over the door was covered in the gold grasscloth!  This wall seemed to be in good shape, but the color scheme was not what we were envisioning for this beautiful room. 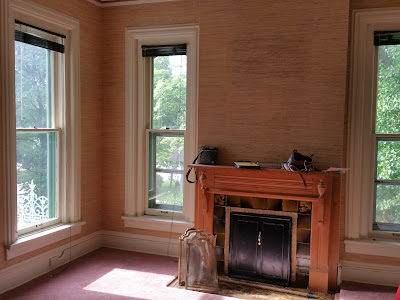 This wall provided the inspiration of natural sunlight and a great view of the huge Ginkgo tree (one of 3 on the property!).  The fireplace mantle was not original to the home, and we did not know when it was added.  The tile was a mustard/brown/black color, and definitely not part of a color scheme we wanted to work around.  Fortunately, the master bathroom was being totally redone and we scored some of the Carthage marble that was being removed to make room for a glass shower!

Notice the mauve carpet in the photo above---it was also removed by the people working for the Foundation and the wooden floor was refinished with a beautiful walnut color stain.  It made a striking contrast with our light, airy color scheme: 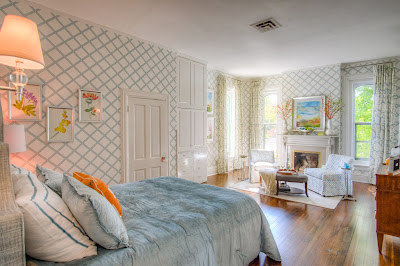 With the help of some awesome reps and giving vendors, we were able to use Thibaut wallpaper and fabric, Norwalk furniture, Lili Allessandra bedding, Global Views accents, Angela Rose Distributing for hardware, and Wendover Art for our renovation! 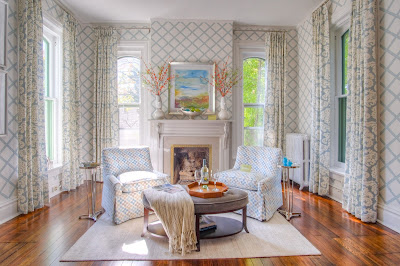 See what I mean about the bright sunlight being a great inspiration.  Just look at the way it shines across the seating area! 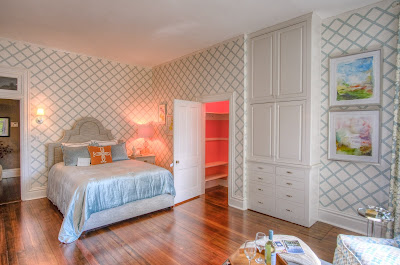 Besides the orange accents in the pillow, lamps and artwork,we had the little closet papered with a fun orange geometric wallpaper from Thibaut, as well, which added the little kick of something unexpected to the room.  We also changed out the handles and knobs with glass and silver hardware to match the original glass doorknobs on the doors.  The large built-in you see was added a few years ago to house a TV and provide extra storage.  There was originally a doorway to the nursery from that area. 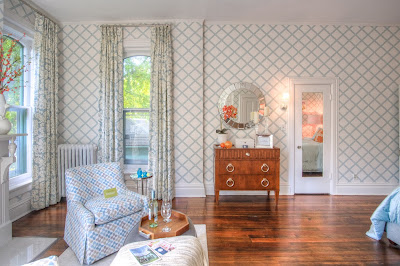 This angle shows the doorway to the master bathroom.  We love the decorative chest from Global Views---it has classic detailing, but is also somewhat contemporary in appearance.  The ceilings were tall in this house, but it was also finely detailed, so any furniture pieces that are too bulky looked out of place.  The Norwalk chairs have a low back so they didn't hide the fireplace. 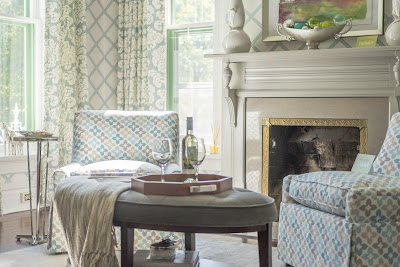 Notice that we had the fireplace painted a pale grey, which blended very nicely with the marble from the bathroom.  It also tied in with the rest of the house, as the landing was very close to the same color and it was repeated in several other rooms.  We used a lot of polished silver accents, but kept the gold/brass around the fireplace opening, keeping it from looking too cold. 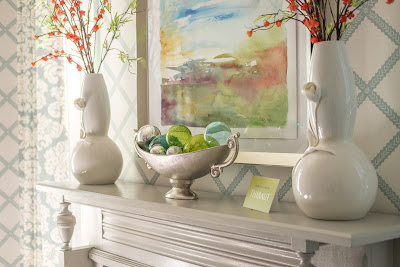 Our final accents of glass spheres on the fireplace with the colorful watercolor and orange and green florals were recipients of the morning sunlight.

It was a bit of a sad day when the furniture and decor was removed and brought back to the shop.  We left the drapery in hopes that the new owner will love them as much as we did.....and possibly would want some of the items brought back :)
Posted by Madison Lane at Monday, December 26, 2016 No comments: