This week is the Home and Gift Market at the Dallas Market Center.  We'll be leaving Thursday and returning on Sunday.  If you have any special requests, call us this week and let us know.  We have a list of items we will be looking for.  The majority of things on our list will be home decor:  lamps, wall art, upholstered furniture, small tables, and other case goods.  Although we have these items in the shop, finding companies that are easy to work with and ship fairly quickly is important.  We do have our favorite showrooms, and Codarus is one of them.  Here's a preview of their showroom (in case you missed it on our Facebook page):


The shop will be closed on Thursday 6/23.  We'll be back the following Monday, as usual.
P.S.  Thanks to our rep, Susan Linn, for sending the video preview!
Posted by Madison Lane at Sunday, June 19, 2011 No comments:

Loft Living: some before and after pictures

While we are still waiting on some lamps and a couple of furniture pieces, the overall loft apartment is finished.  In the meantime, enjoy looking at the before and after shots of this downstairs loft apartment.


Looking to the front of the room from somewhere in the kitchen, before: 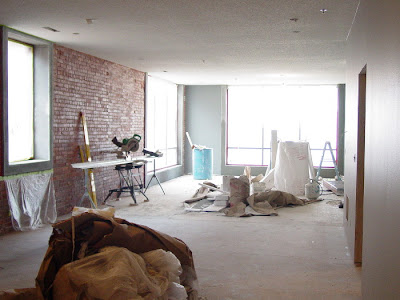 I don't have a picture of the bare kitchen walls, but here's the shot of the kitchen from the middle of the room: 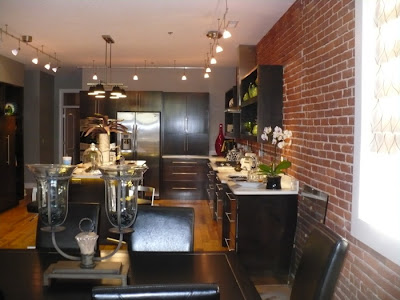 Looking into the kitchen, toward the left wall, after: 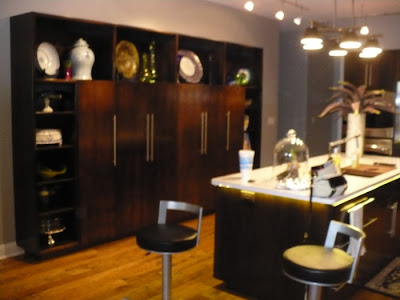 Looking into the kitchen to the right wall, after: 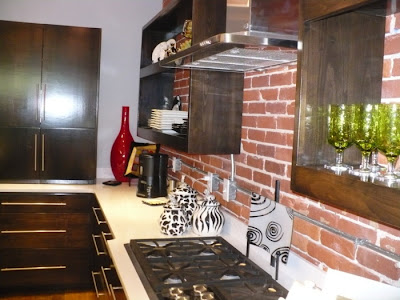 Closeup of the window between the kitchen and living room: 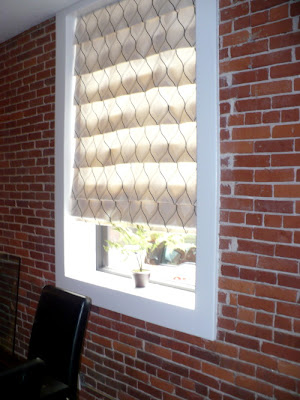 The corner of the living room before the plastic is off the windows: 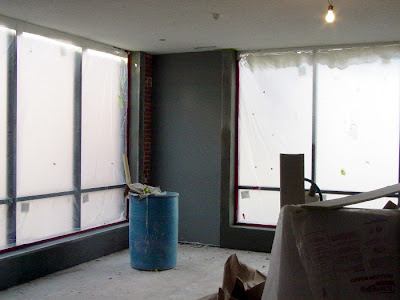 After the plastic is removed and the lights are installed, the front window looks into the street: 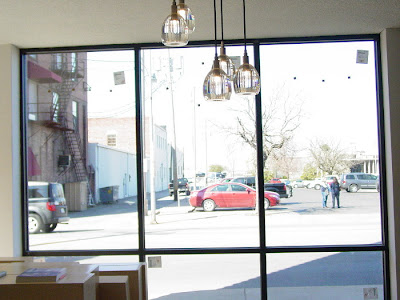 With the obvious lack of privacy, we needed window treatments to cover the windows but allow light to come in or it would be a dark, depressing room.  Our idea to install the "shades" at 70" allowed the room to be private, and gave a great looking backdrop to the furniture purchased by the client.  However, after living with the window treatments for a couple of weeks, it was requested that I make the front 3 windows operational.  I was able to retrofit rings/cords/cordlocks so the treatments actually became "shades", but are only raised about 14", but does allow the clients to see some activity on the street and sidewalk. 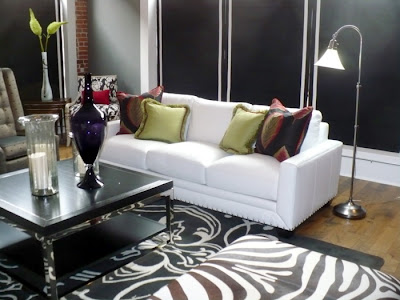 One of our seamstresses, Pennie, does another wonderful job on the custom pillows.  The zebra ottoman looks much larger in this picture than it is in real life!  We are anxiously awaiting a floor lamp and table lamp to replace the ones she is using.  The area rug is from the Candice Olson collection from Surya Rugs. 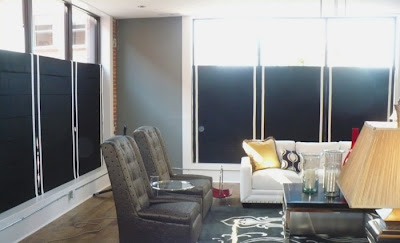 This angle shows the corner of the room an a better view of the window treatments.  They are made as tucked shades, with hand sewn flat trim (white).  As I mentioned earlier, only the front three windows can actually operate as a shade, the others are stationary. The specially fabricated hardware for these treatments for the sheet metal trimmed windows makes it possible for them to be easily lifted off with one hand when the windows are cleaned.  Another sidenote:  each shade spans 46" and is mounted to a 1" X 2" board which is reinforced with an L-style bracket the same width to prevent warping.  Each board is knotched on the ends and sits on tiny posts built into the brackets.
As wonderful as the apartment looks in the pictures above, the addition of pictures has already made a tremendous change.  Stay tuned as we put the final touches in place and future pictures are posted of the room.
Posted by Madison Lane at Sunday, June 12, 2011 No comments:

Nature's decor: in praise of TREES!

I know I should be showing you some of our latest work, but during this emotional time for Joplin, I wanted to show you a quick snapshot of why we live in "tornado alley" in the first place.  Let me just say how lucky I am that these pictures were taken from my front door, one looking to the right, the other looking to the left: 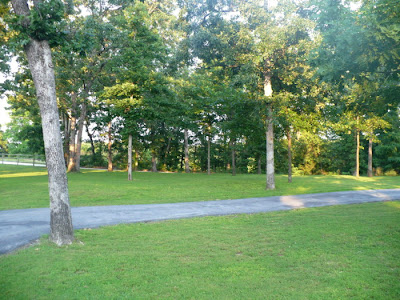 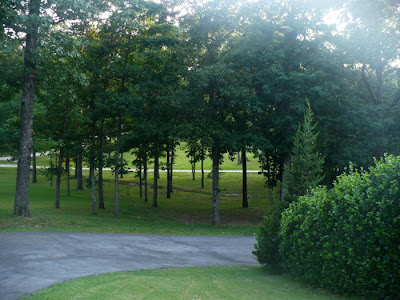 There is just something about trees . . . .what is it?  After the tornado, it was the twisted trees I saw in my dreams that first night.  Ironically, Pam saw the same thing.  I won't even post a picture, I know you can find them on any Google search for the Joplin  Tornado.  It doesn't leave your mind.
Sometimes nature is truly the best decorator!
We are currently finishing some awesome projects, I hope to get some pictures posted soon.  Also, we will be attending the Dallas Market in 3 short weeks.  Stop in (or email) your wish list.  We want to know!
Let's enjoy life's real beauties, and that is truly what nature has to show us.  MLI is here to help make your home your peaceful, lovely refuge.
Posted by Madison Lane at Sunday, June 05, 2011 1 comment: