Decorating a breakfast room: What would you do? 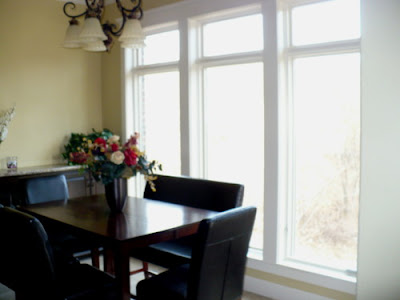 OK, so you wanna play decorator, huh? Well, now's the time to chime in with your comments. Here's a little background on the room above: Privacy isn't much of a concern in this room since it faces the woods. The concern we had was sun control. Sometimes the transom style windows are great for letting in light, or they can let in too much sunlight and fade everything in sight. The home is still new and we suggested dressing these windows after the client has lived there for a month or so.

OK, below is the first idea. These are roman shades mounted all the way into the transom. They could be raised and lowered for controlling sun. The sheer cafe curtains on the iron rods are there to break-up the space, add a new texture, and are semi-private. 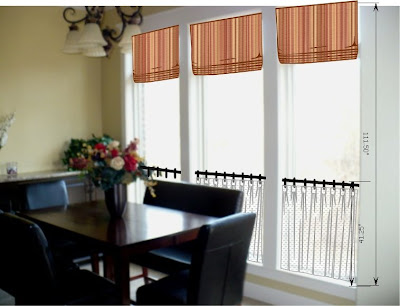 These renderings were done pretty quickly, so be forgiving of the roman shade that is on the ceiling, or the window missing the cafe curtain---you get the idea.

After a couple of weeks, a lamp was placed on the built-in sideboard along the wall with a shade very similar to the new fabric we chose for the other renderings. Client likes the light from the transom so the roman shade is started below the break in the windows. The bottom is left open. 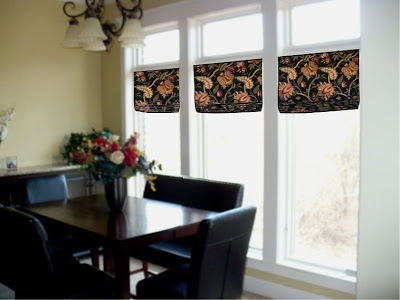 The next idea was to forget the roman shades and have full view with only cafe curtains on the bottom third of the window. The thought behind this was that the chairs are counter height anyway, so the view over the top of the curtains would be unobstructed. Of course this rendering and the others could be made with any fabrics, sheer or not. Much of that decision also depends on the colors we use next door in the living room. 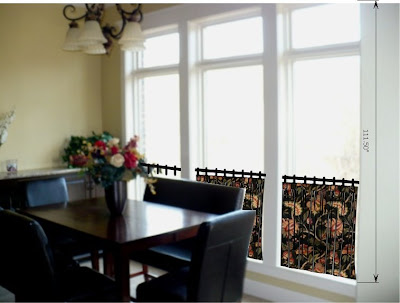 The renderings are all done with Minutes Matter Studio. We will soon be getting the newest upgrade which will make our jobs even easier and your potential rooms even more realistic. We could go on and on about the software, and tell you how great all the people are associated with the program, but that's information for a "post" by itself.
Posted by Madison Lane at Sunday, April 05, 2009

Love your designs! I use MM too and was lucky to be a beta tester. I'm loving the new upgrade. Your store looks adorable. We are have a decorating challenge if your readers like a challenge I hope you visit us.
Marleen

Wow that is cool software!! I like the first one best.
Great Blog!!
xx-Gina