Before and After: The off-center fireplace syndrome 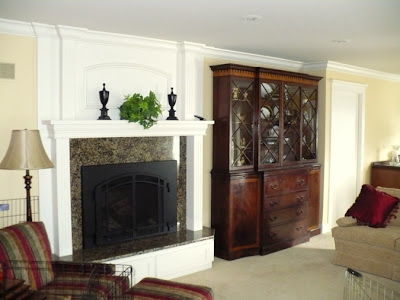 We're starting with the after picture for a change. Although we aren't completely done with the "decorating" in the living room, the carpenters, painter, carpet layers, fireplace specialists, granite layers, and even the upholsterers are gone. It's the fine tuning that takes a while (that's not to say the remodel didn't!). We'll be adding some things to hang on the wall, different pillows, and another chair and table, but the big stuff is finished. And if you've been following along, this is the living room that is connected to the kitchen from the previous post.
Before (left side of fireplace) 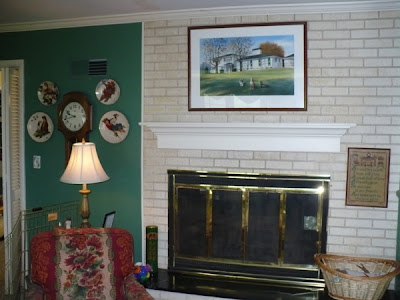 It might look centered, but you'll see in the picture below that the hearth ran along the wall to the doorway, making the whole wall a problem.

Before (right side of fireplace) 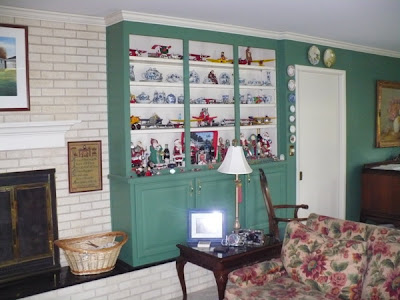 So at some point, a cabinet was built on top of the hearth---something needed to go in that spot!
So when you scroll back up to the first picture, you'll see a beautiful hutch in the green cabinet's place. It was originally on the other side of the living room, but not really appreciated since it was only viewed from the side when you entered the room.

In reality, the fireplace is still off-center--there is more space on the right than the left, but it does appear to be centered to the living area. The furniture in the "before" shot is the same furniture in the "after" photo. They are wonderful pieces handed down (as the hutch is) to the homeowner. We found some updated fabrics and had them re-upholstered. We'll show better pictures (close-ups) in a future post.

If you're wondering, the wall color is now "Compatible Cream", a Sherwin Williams paint color. The trim is custom matched to the doors in the home. The ceiling color was made slightly creamier than the trim so there would be more definition between the two.